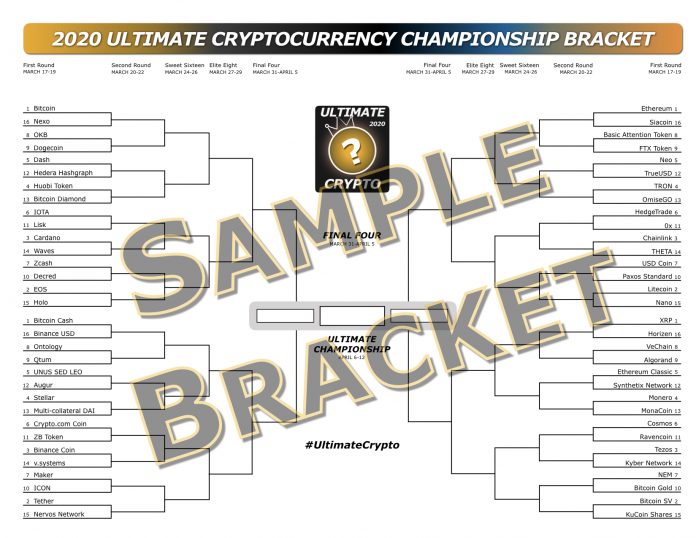 This blog post is about the matchups in the sample bracket. Again, it’s not the real tournament bracket which will be announced on March 13.

There are some intriguing matchups in this demo bracket. When I prognosticate, I’m not saying which coin is my personal favorite, rather I am predicting which one the voters would prefer. Let’s take a look:

In the Bitcoin bracket

Bitcoin should easily overpower Nexo in the vote, while Dogecoin and its horde of loyal followers should crush native exchange token OKB. That would set up an incredibly exciting 2nd round matchup between Bitcoin and Dogecoin. I think it would be close, but bitcoin would move on in a tough 2nd round matchup.

In the 5/12 game, Dash should move past Hedera Hashgraph and the 4/13 is a matchup between two coins that no one cares too much about. I’d be bold and say that Bitcoin Diamond pulls the upset before falling to Dash in the 2nd round.

Six seed IOTA might have a tough matchup with Lisk, but I see it advancing to face Cardano after ADA pushes wast Waves. Cardano here moves on to the sweet 16 in a dogfight.

Wow, the 7/10 matchup is a good one. Both coins have dedicated followings. Though close, I see Zcash here moving on in a tough game facing EOS. Though it gives a good fight, EOS advances past Zcash.

In the later rounds, Bitcoin would advance past Dash and Cardano would pull a slight upset over 2-seed EOS. That would be a great matchup and fuel the rivalry between the two coins and Dan Larimer and Charles Hoskinson.

Bitcoin beats Cardano to move on to the Final Four.

Lots of platform coins in this bracket, I count six. Tough to predict this one and ultimately kind of boring. I see nobody’s favorite Tether losing to the winner of the 7/10 matchup and 12 seed Augur triumphing over UNUS SED LEO.

The 8/9 matchup highlights how exciting this tournament will be when done every year. In the 2017 bull run, Qtum was constantly in the top 20 and would have been a 4 or 5 seed. Now it has fallen all the way to a 9 seed. I don’t know if Ontology was even around in 2017.

In the sweet sixteen round, Stellar could topple Bitcoin Cash. I think it has a slightly better reputation among the average cryptohead. I’ll take Bitcoin Cash if I had to make a choice.

Ultimately, the winner of that game advances to the Final Four over Binance Coin.

Siacoin (16) gives Ethereum (1) a bit of a struggle but ultimately bows out in the first round. Basic Attention Token overpowers FTX Token and loses in a tough second round matchup to parent Ethereum. Could BAT really be better than Ethereum given it runs on the Ether blockchain? Stranger things have happened in crypto! The votes would tell.

Upset alert: OmiseGO (13) might be able to fight past TRON (4). OmiseGO would have been a 3 or 4 seed a couple of years ago. How things change. A possible second round matchup between Neo and TRON is quite intriguing. Both have die-hard followings.

I could see 11-seed 0x pulling the upset on HedgeTrade because I’ve never heard of HedgeTrade before! In the rest of the bottom portion of this bracket, there is a stablecoin matchup between USD Coin and Paxos Standard. Who wins? Who cares!

I see Litecoin moving all the way to the Elite 8 and falling in a tough matchup to Ethereum, battle tested from its sweet sixteen matchup against Tron/Neo. Ethereum wins the bracket and makes the Final Four.

And in the XRP Bracket

XRP as the top seed will be very interesting. It’s such a polarizing coin which will make for exciting voting. I don’t see little-known Horizen putting up much of a struggle and XRP also breezing past the winner of the VeChain/Algorand matchup.

It gets interesting here. Ethereum Classic (5) should move past Synthetix and Monero (4) triumphs over MonaCoin in a battle of the Mon’s. Monero moves past Ethereum Classic and bold prediction here, upsets XRP in the sweet sixteen.

Hopefully we get this matchup in the real tournament, I think Monero could defeat XRP.

Ravencoin (11) powers past Cosmos (who are these coins?) and surging Kyber Network (14) gives Tezos all it can handle. Ravencoin (11) moves onto the Sweet Sixteen, taking down Tezos.

NEM (7), a 3-seed a couple years ago powers past nobody’s favorite Bitcoin Gold and Bitcoin SV (2) powers past KuCoin Shares.

Bitcoin SV moves on to the Sweet Sixteen and then ends Ravencoin’s Cinderella run in the sweet sixteen.

This would set up a matchup with Monero in the elite eight, which I see Monero winning, moving on to the final four.

In this fantasy bracket, we have:

The first matchup is eagerly anticipated by Bitcoin Cash and Bitcoin fans. The trash talking rises to historic levels in the days of this matchup. Ultimately, Bitcoin moves ahead.

Monero gives Ethereum a run for its money, but ultimately is too little-known to topple Vitalik’s titan. However, Monero gains worldwide exposure. Many crypto heads in 2020 have never heard of it!

This tournament will be great exposure for little-known but quality coins.

In the championship game, the top two coins face off. Perhaps in 2017 this would have been a closer game, but this year, Bitcoin’s market dominance propels it to victory here and the 2020 Tournament Championship.

Bitcoin (in this demo bracket) would be The Ultimate Cryptocurrency.

Nothing too bold in this sample prediction, just calling it how I see it.

That was exciting to write and that was just for a sample demonstration bracket! I can’t wait until March 13 when the real bracket is announced.

The tournament starts soon, but the time is now to start spreading the word about this tournament! Do you have a favorite coin you want to see make a deep run?

Start telling your friends about this tournament and make sure to vote when it’s time. (Don’t bother voting for president though. That’s a waste of time).

This is going to be one exciting tournament!