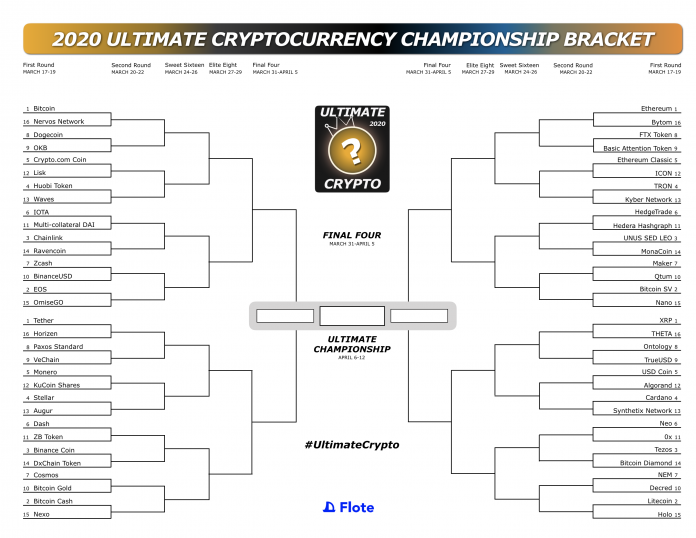 The bracket is out after one of the WILDEST days in crypto I’ve seen in a minute. Bitcoin went from around 8000 to 3800 to 5700 to 5000. Plenty of other coins saw HUGE gains and HUGE losses. A great way to start what should be a wild tournament.

Here are a few of my thoughts on the coins and matchups in this year’s tournament:

In the Bitcoin Bracket

A pretty straight shot for Bitcoin to the Final Four. Pesky Dogecoin will be a tough matchup, but after that, there aren’t too many challengers left in the bracket.

In other parts of this bracket, I could see some upsets happening:

This one is wide open. Tether grabbed the #1 seed after most other coins fell hard in yesterday’s market crash.

I see #4 Monero advancing over #2 Bitcoin Cash in the final.

In other matchups, I could see #9 VeChain taking down #1 Tether in the 2nd round.

#6 Dash could be trouble for #3 Binance Coin and what a fun potential matchup with #10 Bitcoin Gold potentially playing #2 Bitcoin Cash in the battle of the 2017 forks!

After pushing past a tough #9 seed Basic Attention Token and a fight from #4 TRON, I see #1 Ethereum moving past #7 Maker in the bracket final.

I really like the possible second round matchup between #1 Ethereum and #9 Basic Attention Token. Could BAT, which runs on the Ethereum blockchain actually be considered the “better cryptocurrency?” Who knows! Stranger things have happened in crypto!

I see #4 TRON surviving a tough challenge from #13 Kyber Network and then making quick work of #5 Ethereum Classic.

I see either the winner of the #7/10 Maker/Qtum matchup going on to upset #2 Bitcoin SV when the crypto community shows out in droves to vote against it.

I see #2 Litecoin over #1 XRP in a tough matchup to get to the Final Four.

#4 Cardano presents a tough potential Sweet Sixteen matchup for #1 XRP. Both coins have dedicated followings. But I see the better-known XRP prevailing.

#10 Decred over mysterious #7 NEM before succumbing to #2 Litecoin in the 2nd round.

Litecoin vs. Neo would be a great matchup as well.

It’s up to YOU to vote to determine the winners. On March 17, go to the home page of the website, or to https://twitter.com/UltimateCrypto7 to vote, tell your friends, and may the best coin win!