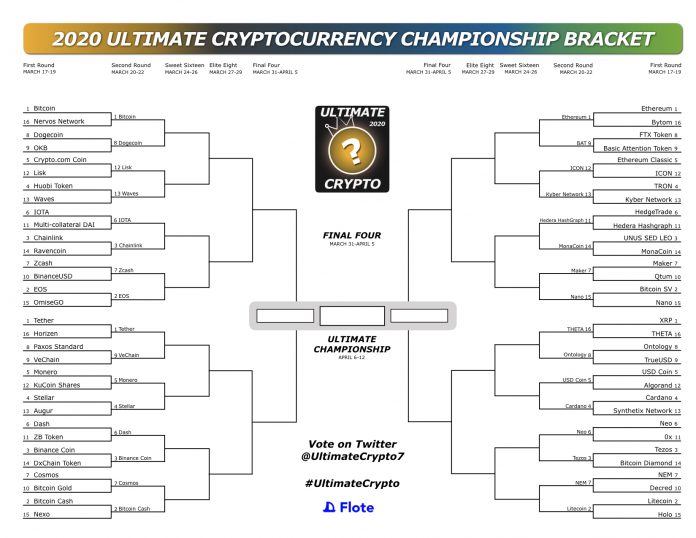 Vote in the second round at https://twitter.com/UltimateCrypto7

With one round in the books, this is what the bracket now looks like.

Some shocking upsets that might not have been so shocking if you think about it. Either way, (some of) the people have spoken!

These were the scores from the first round.

Bitcoin and Dogecoin easily advanced. Twelve and thirteen seeds pulled upsets in their games against the weak 4 and 5 seeds Crypto.com Coin and Huobi Token.

Other than that, the top seeds win out. I thought Ravencoin would make a bit more noise in the tournament, but the boys from Chainlink were fired up about this tournament and won easily.

Not much drama in this bracket, nor really any upsets. The closest we got was 9. VeChain over 8. Paxos Standard, but that can’t be considered much of an upset.

Good upsets up and down in the second round. I’m especially looking forward to the 4. Stellar 5. Monero one.

This bracket is BUSTED! Almost, exactly. There still is Ethereum, which looks like it could have an easy romp into the Final Four, provided it can make it past the winner of the 12. ICON / 13. Kyber Network game. ICON has a lot of people excited about it and could present a challenge to 1. Ethereum.

I though that Bitcoin SV with its horde of followers could present a stiff challenge to Ethereum, but it looks like that challenge has been replaced by 15. Nano. Nano has roared into the tournament, easily taking down 2. Bitcoin SV and currently dominating 7. Maker.

Ethereum should move past 9. BAT in the 2nd round, and the battle of the mystery coins 11. Hedera Hashgraph / 14. MonaCoin looks interesting as well.

Wow, a clean sweep of the top seeds. Oh wait, there was one which fell. Who was that?

Neo and Tezos looks to be the most exciting second round matchup here. I expect Cardano and Litecoin to advance easily over their opponents.

Remember to vote in the crypto tournament second round, either on the Home Page or at https://twitter.com/UltimateCrypto7