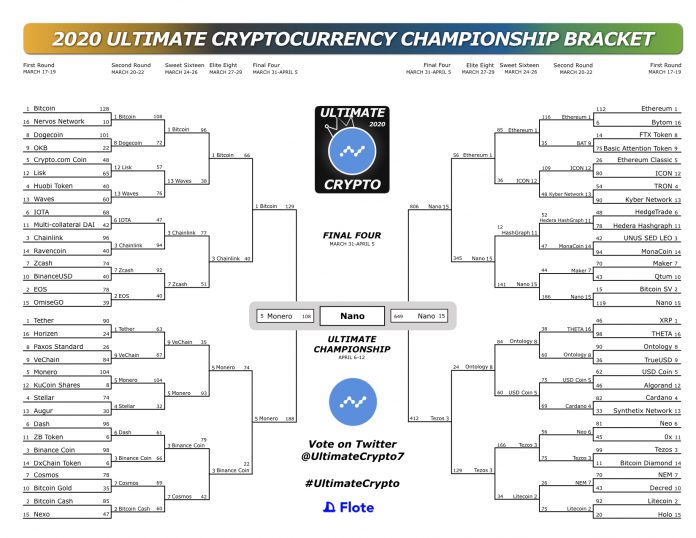 A champion has been crowned.

A runner up has emerged.

The tournament is complete.

What an amazing journey, when 64 of the top cryptocurrency vied for supremacy, at least in this iteration. After

After an exciting month, a victor has emerged.

Who might that be, introducing the 2020 Ultimate Cryptocurrency Champion…

Nano is our 2020 Ultimate Cryptocurrency.

Many pegged Monero as a sleeper coin to win it all, but they fell one game short of their ultimate goal.

Instead it was the unsung but enthusiastic Nano team that took home the trophy. At the beginning of this tournament, they were a rowdy bunch, extolling other Nano supporters to “shill their way to victory.”

Well, they talked the talk and now have walked the walk.

Congratulations to Nano! The first champion of the Ultimate Cryptocurrency tournament!

It will be remembered as a completely dominating run through the bracket.

In a landslide, the OG goes home to lick its wounds after what some would call a surprise defeat at the hands of Monero. However, they did make their way to the medal stand.

Their opponent, Tezos, made a surprise Final Four run, helped by a shocking upset of two seed Litecoin in the Sweet Sixteen.

Tezos also had an explosive outpouring against ultimate champion Nano, but it looks as though they expended their energy too much there, scoring just 33 points in the losing effort, which was by far their lowest output of the tournament.

For Tezos, the drought couldn’t have come at a worse time.

That concludes the 2020 edition of the Ultimate Cryptocurrency Championship. What an exciting month it was!

Thank you to everyone who voted, wrote kind comments, and shared this event with their friends and fellow crypto enthusiasts. It really felt like a real exciting tournament once the second round rolled around. There were so many exciting games, just like in the real NCAA tournament.

The Final Four matchups were also extremely exciting. Over 1200 people voted in the Nano vs. Tezos matchup!

I hope next year, that is just an ordinary game. Please tell your friends and share this with your fellow crypto lovers as we run it back in March 2021!

P.S. Stay tuned for a special Autumn tournament, one that I have recently thought of which should capture the excitement of this mock NCAA tournament as well.