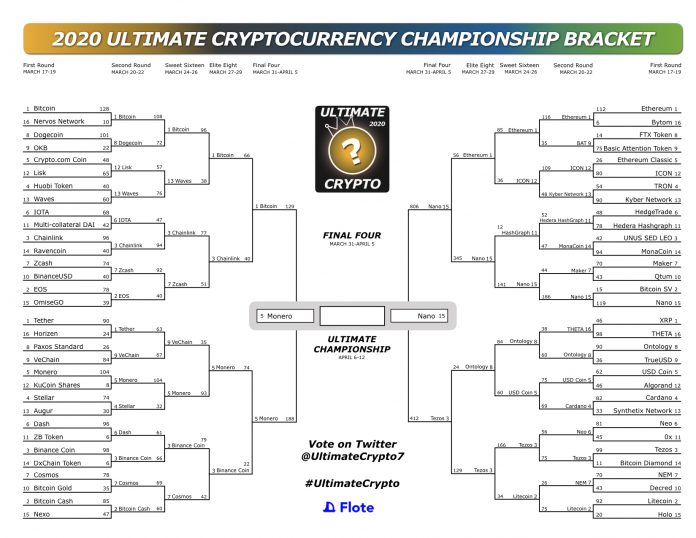 Two games happened this week and now we have arrived at the championship.

Where once there were 64, now just two remain.

There will be a 3rd place consolation matchup for the losers of this week’s games, but who really wants third place?

Let’s find out what happened!

This matchup was closer than it looked, but Monero and not Bitcoin is on its way to the championship matchup. Many were calling this the de facto championship game. Either way, the final matchup will pit Monero against the winner of the Nano/Tezos matchup.

Many pegged Monero as a sleeper coin to win it all, a dangerous five seed lurking in the grass.

The two coins duked it out in a back and forth game, but Monero kept its advantage and held off every Bitcoin charge. This was Monero’s toughest test to date.

Both Bitcoin and Monero had their highest offensive outputs of the tournament.

Nano faced its stiffest test yet, by far. No longer able to simply steamroll its opponents, unheralded Tezos put up the most valiant fight against the fifteen-seed-turned juggernaut.

Nano is simply on fire, and though Tezos put up as many points as it could, Nano put in its highest-scoring performance as well.

This game featured the most combined points scored, as well as most points scored by a winning coin, and a losing coin.

Tezos‘s 412 points would have been enough to win any other game during this tournament, but it was just over half of what Nano was able to put up in this matchup.

The championship game will be one which few predicted but will be no less exciting. Two coins, coming in hot but coming off of their stiffest challenge yet do battle to determine the Ultimate Cryptocurrency in 2020.