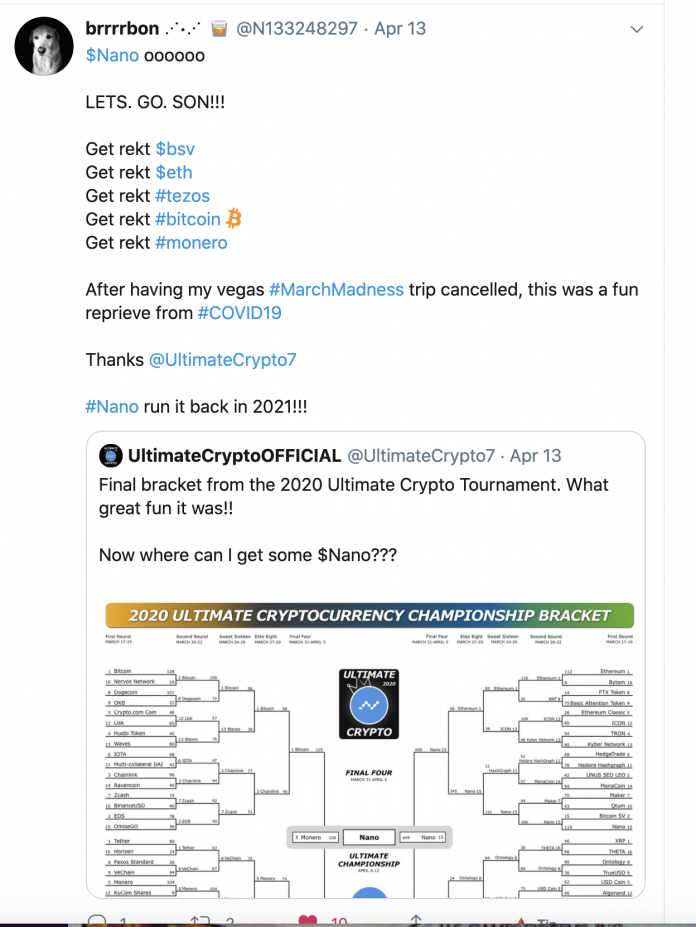 The ultimate crypto tournament came to me when I was perusing Reddit and saw someone jokingly put some of the cryptocurrencies into a mock bracket. At the time (March 2020), the U.S. was gearing up to watch the annual NCAA basketball tournament. It’s a very exciting single-elimination tournament where unexpected and lower ranked teams can catch fire and upset higher ranked teams, making a deep tournament run.

The tournament was soon cancelled, due to the Certification of Vaccination ID – 19 “pandemic.” After being very angry for a time, I figured I would make my own similarly-styled tournament and put it on instead of the NCAA basketball one.

Thus, the Ultimate Cryptocurrency tournament was born. Before, during, and after I learned a few things about cryptocurrency which I wanted to share with you:

Don’t Underestimate the Power of the Shills

To publicize the tournament, I posted on each coin’s Reddit page. Sometimes the posts were met with disdain, other times with enthusiasm.

The most enthusiastic responses came from Nano and ICON. One reply was along the lines of “Yes! Let’s shill our beloved Nano to victory!!” And they did.

They celebrated heartily afterward too.

ICON was excited because a 12 seed always beats a 5 seed. ICON made the Sweet 16 before losing in a fight to Ethereum.

Dogecoin, which has a rabid following, also was neck and neck with Bitcoin in the second round before BTC pulled away late.

I was contemplating this and wonder how these coins will fare during the next bull run. An enthusiastic and engaged community is one of the prime metrics many investors use when considering the probity of an investment.

I can’t help but think they’ll enjoy a hearty spike in the years ahead.

I was caught off guard by the success of coins such as Chainlink and Tezos as they made their way to the Elite Eight. After the tournament, Chainlink enjoyed meteoric success in the market, almost quintupling in price after the tournament ended. It would currently be the top 2 seed, taking the place of Bitcoin Cash.

Other Elite Eight coins such as Binance Coin, Tezos, and Ontology haven’t made much noise in the market since the tournament ended. However, it is something I will keep my eye on in future iterations of the tournament.

The only victory was Bitcoin Cash’s defeat of 15 seed Nexo, not exactly something to go wild about, and even that was closer than most first-round matchups. Cosmos took down two of the forks (Gold and Cash), but their luck ran out against Binance Coin.

Fourteen seed Bitcoin Diamond did absolutely nothing against 3 seed Tezos in its first round matchup. It’s not even worth a picture recap.

Voters gave the bitcoin forks very little love. It seems that outside of their fanbases, these forks have very little widespread appeal, even though their block sizes may be larger or their transaction fees smaller.

Bitcoin is still the king.

Monero is the Crypto’s Crypto

I like to refer to Monero as the crypto’s crypto. It’s hard to find people in the cryptocurrency space who disparage it, most refer to it affectionately.

However, outside of the arena, many newbs are unfamiliar with the coin. It took me almost 6 months to became aware of its existence after diving into the busy cryptocurrency space in 2017.

It did very well for a 4 seed, lurking in wait to take down coins such as Stellar, VeChain, Binance Coin, and eventually to unseat Bitcoin, the top overall seed.

The Bitcoin-Monero matchup was one that many wanted to see and it did not disappoint. Bitcoin hung close, but Monero pulled away late. I believe this shows the preference for the privacy coin rather than the OG.

It will be interesting to see what happens if they meet again in the next year’s Ultimate Cryptocurrency tournament.

Unfortunately for Monero, they ran into the buzzsaw known as Nano in the championship game, netting the silver medal.

The top sixty four coins by market cap in early March were granted entry into the tournament. Now, less than six months after that, the field would look dramatically different.

The champion Nano wouldn’t even make the field if it began today.

Eighteen new coins would be in today’s tournament by my count. That’s more than an entire bracket replaced. There would be a new 2 seed Polkadot.

Here is what the tournament would look like if it began today:

There are some interesting matchups in this potential bracket. Bitcoin against Litecoin in the Elite Eight is one. Would XRP lose again the first round, or would it survive to face a tough test in Dash and then Monero?

Ethereum and Ethereum Classic might face off in a tough 1 v. 8 second-round matchup. Twelve seed Dogecoin would be a tough draw for 5 seed Neo and would be waiting for the winner of the Battle of the Ethereums.

At the bottom of that bracket, a Sweet Sixteen matchup between Bitcoin SV and Bitcoin Cash would be possible. That would be fun to watch.

That Tether bracket is wide open. I don’t see a clear favorite there.

Here is the tournament as it began in March 2020. It will be interesting to see how much it changes when it is finalized in March 2021.

Once again, here is the completed tournament bracket: