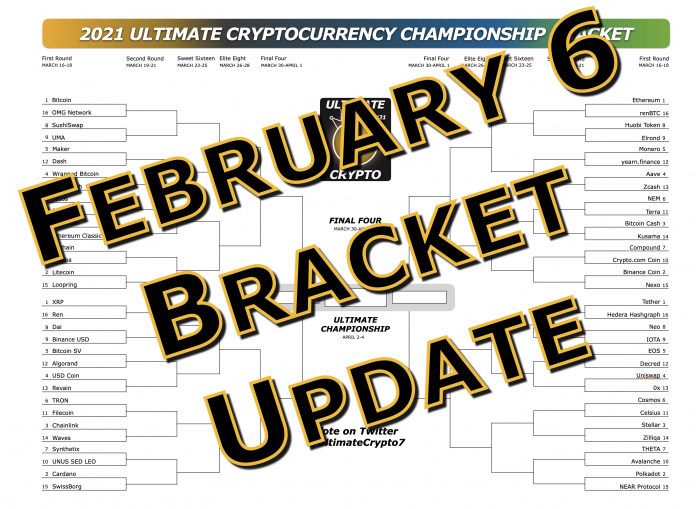 While the NCAA is forcing its players to pretend they are all diseased, and while the coaches and teams obediently follow their commands, and even thank their masters for “keeping them safe,” the real winners this year are CRYPTOCURRENCIES, setting all time highs ($1 trillion and counting!) and living life ABOVE THE RIM! SLAM DUNK!

The 2021 ULTIMATE CRYPTO Tournament will begin on March 16. Selection Sunday will be on March 14. It’s going to be great!

This is the first of five bracket updates, published each Friday until Selection Sunday on March 14. Here’s what the bracket would look like, if the tournament started today.

Bitcoin is again the king, and overall 1 seed. There are a lot of newcomers into this tournament. Dogecoin is a shooting star, rocketing up from an 8 seed last year, to a 3 seed in the Bitcoin bracket. Its potential Sweet 16 game against Litecoin would be exciting, as would an exciting Elite 8 matchup against Bitcoin.

Would XRP be knocked out in the first round again? Would the SEC turn up to vote to bolster its case? Who would the favorite here be, Cardano? This bracket setup would be perfect for a dark horse run to the Final Four.

The matchup of Ethereum against Bitcoin might happen, it would only be renBTC. The coin that nobody wants to see in its bracket, Monero, is lurking in the 5 spot. I think it would make quick work against yearn.finance though face a stiff challenge from Aave. Binance Coin against Bitcoin Cash (if it made it that far) would be an interesting matchup.

Will Tether be knocked out in the first round again too? Would Polkadot advance to its first Final Four in its first appearance in the tournament? Would Stellar be able to knock it out? Probably not. What about Uniswap. There are a lot of new coins in this one. That Cosmos/Celsius first-round matchup looks juicy too.

The tournament will begin on March 16. Sixty-four coins in there, just like last year. It’s going to be exciting. Tell your friends and follow @UltimateCrypto7 on Twitter for the voting.