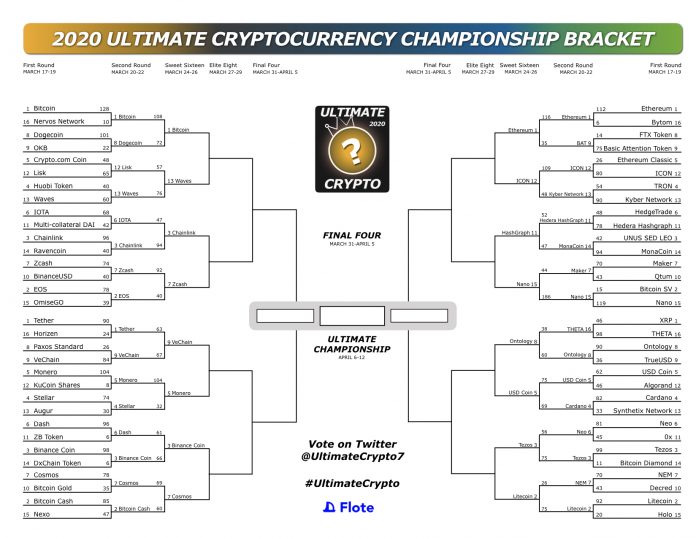 The second round is over! We’ll get into the recap shortly, but first, if you are reading now, there’s a good chance the next round of the tournament is going on as we speak.

If you haven’t already, head to https://twitter.com/ultimatecrypto7 to vote in the tournament.

Some unexpected faces make their way to the Sweet Sixteen! Let’s get into it.

These were the scores from the second round.

Bitcoin and Dogecoin was a very hotly contested matchup. The Shibes kept it close for most of the match, only down 2 % on the last day, but Bitcoin pulled away late to play Waves.

Waves fell behind Lisk early, but slowly and methodically made its way back to win handily.

Chainlink led almost from start to finish to take down IOTA. They’re a confident bunch.

Voters turned out in droves to help Zcash move past EOS.

It will be interesting to see if Bitcoin struggles again with Waves or whether or not its close second round match was due to Dogecoin’s popularity.

Chainlink will prove a tough matchup for Zcash I believe.

Down goes another #1 seed. Tether, fell in a close matchup to VeChain in a back and forth contest. VeChain moves on to face Monero, which has been dominant in its two victories over Augur and Stellar. Monero is looking incredibly strong.

Binance Coin held a slight advantage for most of the match and held off Dash in the second round. They move on to take on Cosmos who upset 2. Bitcoin Cash in a strong showing. That could be anyone’s game.

In this busted bracket, Ethereum advanced quite easily against BAT. They will take on 12 seed ICON which overcame an early deficit against Kyber Network. At “halftime” the score was tied and after that, ICON poured it on and won easily.

In a heartbreaking turn of events, reminiscent of the 2011 Women’s World Cup, Japanese-based MonaCoin held a large lead for most of the match against Hedera HashGraph. The 11 seed HashGraph tightened up their defense and started scoring points late, to edge the upstart 14 seed.

HashGraph moves on to face surging 15 seed Nano which pulled its second upset to move on to the Sweet Sixteen. The margin of victory was smaller than their crushing of 2. Bitcoin SV, but Nano emerges as one of the hottest teams in this tournament. Who would have thought?

It’s over for Theta, the 16 seed which took down top seeded XRP in the first round. Ontology pushed past them to move into the sweet sixteen. They will then take on 5. USD Coin, winners late over 4. Cardano. That contest was back and forth for most of the time but USD Coin pulled the minor upset and moved past longstanding coin Cardano. USD Coin is the last remaining stablecoin in the tournament.

Three seed Tezos moved past Neo quite easily and will take on 2. Litecoin in the sweet sixteen. Litecoin had a very easy time dispatching 7. NEM.