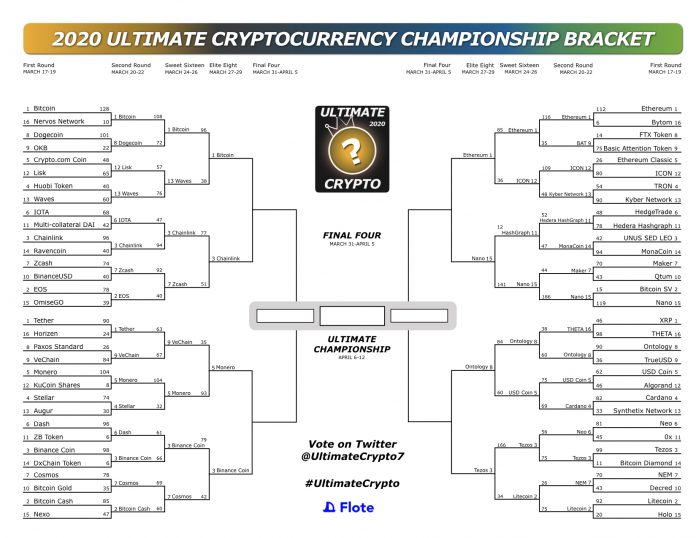 The sweet sixteen round is over and it was a bit of a snoozer. Sometimes that happens in tournaments. Breathe in, breathe out.

We had a very exciting second round with a slew of upsets and tight contests. This round, not so much.

Well, you can’t play favorites. Let’s get into it and recap the matchups:

These were the scores from the second round.

Bitcoin and Chainlink will duke it out for the Final Four spot in its bracket.

Both coins had relatively easy matchups against their opponents. They showed why they are the top seeds.

After an exciting run, Waves bows out after making easy work of Huobi Token and Lisk.

After making quick work of Binance USD and surging past second-seeded EOS in the second half, Zcash‘s run comes to an end, worn down by a methodical and consistent Chainlink attack.

Chainlink is not an easy matchup for Bitcoin. Its popularity as an oracle has been surging in 2020.

But for now, Bitcoin is still the king.

Pre-tournament favorite Monero rolls on, VeChain becoming its latest victim. After taking down top seed Tether in a close second-round matchup, Monero simply overpowered them with its superior firepower.

VeChain can hold its head held high as they put up the toughest fight against the Monero juggernaut, with the most points scored and the narrowest margin of victory thus far for Monero.

It was close early, but Binance Coin methodically pushed past 7th seeded Cosmos.

Perhaps it was the hangover of knocking off 2nd seeded Bitcoin Cash, but in the Crypto Tournament, the opponents just seem to get tougher. Cosmos was simply overmatched.

This is an interesting matchup, but it will be a tough fight for Binance Coin as its use case is limited and Monero comes in on quite a roll.

ICON put up a tough early fight against top seeded Ethereum, but it simply couldn’t keep up. The top seed weathered ICON‘s best shot, stood tall, and raced past it to an early victory.

The twelve seed hoped to make history and knock off both Ethereum Classic and Ethereum in the first edition of the crypto tournament. They tried hard, but it was simply not to be.

Well, this just got interesting. Unexpected and unheralded, just squeaking into the tournament as a fifteen seed, Nano has thoroughly trounced its third straight opponent.

Granted, the competition has not been that stiff, with Bitcoin SV falling hard and Maker putting up little resistance. But this was Nano‘s largest margin of victory, perhaps some cause for concern for top seed Ethereum.

This Elite Eight matchup between the top seed and the lowest possible seed is very exciting. How will Nano do when faced with some real competition?

This bracket is such a mess. It seems no one wants to win as the top seeds continue to fall.

Ontology, little renowned and heralded, moved past the last stablecoin USD Coin in a close matchup.

Three seed Tezos made headlines and shocked the crypto world by annihilating well-liked and well-known two seed Litecoin. What happened? We may never know, but that is what makes the crypto tournament so darn fun to watch.

Litecoin was bumrushed by Tezos, who up until this point, had not made much noise in the tournament.

Many brackets have been busted, with a Final Four spot many thought Litecoin would win, is now up for grabs.

The higher seed Tezos looks to be the favorite.