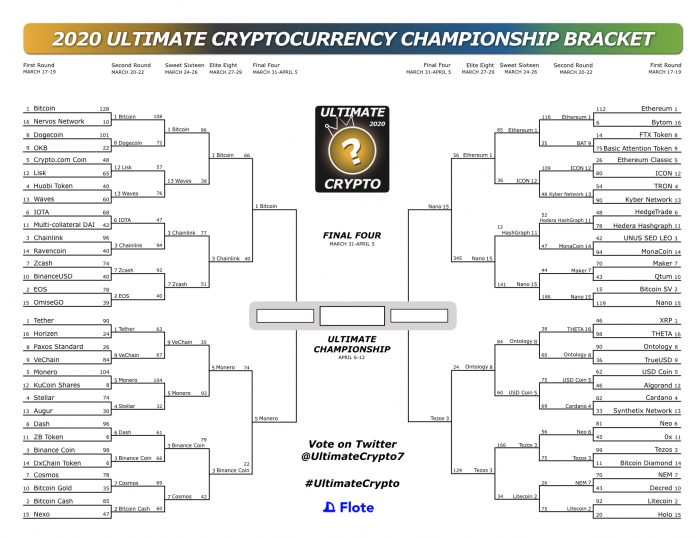 There are now only four teams left, sixty have gracefully bowed out.

I won’t ruin the surprise, but if you had picked all four teams to be in the Final Four, you must have a crystal ball.

Let’s find out what happened!

Bitcoin showed why it is still the king.

In another unsettlingly undominant performance, Bitcoin rolled past the upstart and fiery Chainlink.

The outcome was never much in doubt, apart from the early moments. Chainlink has made a fine account of itself in this tournament.

And Bitcoin goes on to face its toughest challenge yet, in the streaking…

Monero. It was simply too much for Binance Coin. BNB tried to make it a low-scoring contest, but Monero showed it can win gritty too.

After winning a tight second-round matchup against Dash, Binance Coin had experience winning close games. But it didn’t matter as this one wasn’t close.

Monero goes on to face the OG and king of the hill Bitcoin, in a much-anticipated and exciting Final Four matchup.

Who are these guys and girls? Nano, unsung, and recently rebranded from RaiBlocks has absolutely demolished every coin in its path.

One could say that Ethereum performed better than Nano‘s other opponents, but that isn’t saying much considering Nano‘s unprecedented dominance during this tournament. Steamrolling the competition is putting it nicely.

Nano ran away with this one from the get-go and Ethereum had no chance. Pity the coin that must face it in the Final Four round, which is…

Tezos. They blasted their way through their bracket with one of their best performances to date when it mattered most.

Driven by a high-flying offense, the three seed blazed its way past Ontology.

What awaits it in the Final Four round is a coin hotter than the sun.