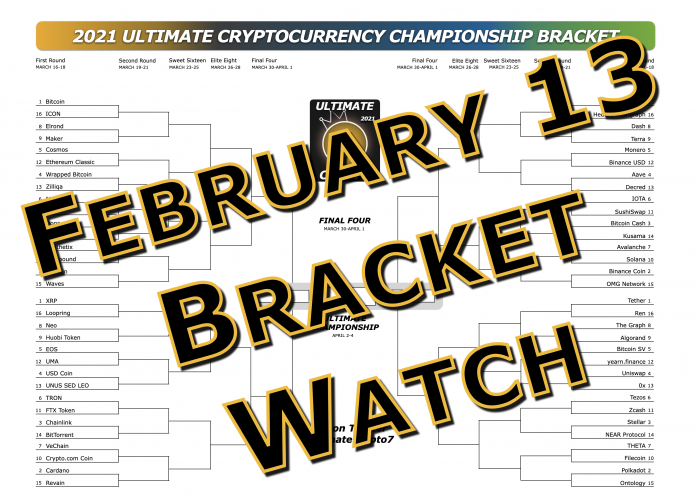 High school sports were just cancelled here for the winter. Sorry kids, the Boomers need you to politely crush your dreams so Satan’s New World Order can come to fruition.

But here at the ULTIMATE CRYPTO TOURNAMENT we’re FULL SPEED AHEAD!

What a week it was. It seems like every alt coin is up hundreds of percent since the last bracket update. Let’s take a look at the mock bracket below. Please note, the REAL 2021 tournament bracket will be released on March 14, 2021. This is just for fun.

Bitcoin is still the king, and overall 1 seed. Nothing changed in the top 4 seeds of this bracket. A Bitcoin vs. Wrapped Bitcoin would be an interesting matchup for posterity, but would likely end up in a huge blowout win for the 1 seed. Below that, Dogecoin and Litecoin would make an entertaining Sweet 16 matchup, barring any upsets. The only one I could see in this mock bracket would be Compound over Litecoin in the second round. But that’s why they play the games!

XRP somehow sneaked its way into another 1 seed. Upstart Cardano might have a few things to say about that, should the two coins meet in the Elite Eight. That said, XRP is one of those coins that is likely to fall in the early rounds. It’s a coin that crypto enthusiasts love to hate. Perhaps a coin like Loopring would gain immortality by taking it down in the first round.

Cardano would face tough challenges in the early rounds as well. VeChain is no pushover, and neither is ChainLink.

Facing off again on opposite ends of the bracket, Bitcoin and Ethereum have the potential to meet in the championship game. That would be something. Vitalik might get his revenge against Bitcoin Magazine. Monero stands in its way, though that privacy coin would need to get past Aave first.

The bottom of the bracket is intriguing with a potential Bitcoin Cash / Binance Coin matchup. Neither of those coins has been too inspiring. The potential Sweet 16 matchup of ETH and XMR could be the de facto Final Four matchup.

Tether faces a tough draw in the first two rounds, and would be lucky to make it past the first week. Ren has been skyrocketing as have The Graph and Algorand. That would be a good 8/9 matchup. Uniswap might push its way to the Elite 8 in this weaker area of the bracket.

Below them, that area of the bracket is wide open, with veteran coins such as Stellar and Zcash and newcomers like Filecoin and Polkadot. This hypothetical bracket is actually loaded with talent. Six seed Tezos made the Final Four last year. Zcash was in the Sweet 16. Seven seed Ontology reached the Elite 8 and 15 seed Ontology was defeated by Tezos in that Elite 8 matchup in the same bracket. THETA achieved fame by taking down 1 seed XRP in the first round last year. Interesting how things work out.