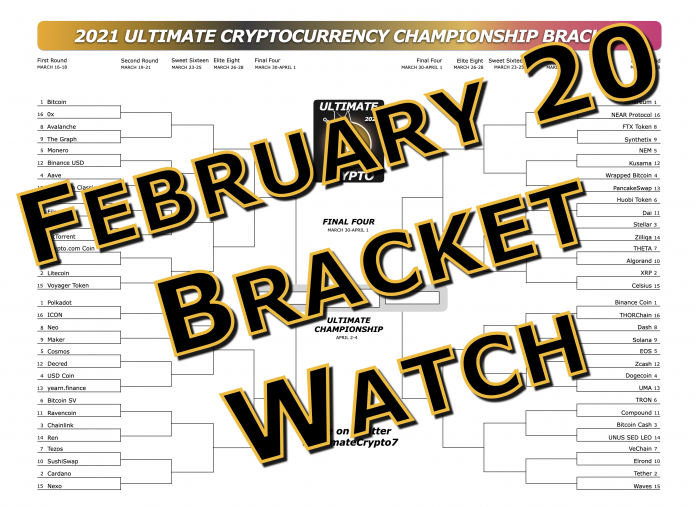 I’m getting excited for this year’s tournament. It’s going to be a lot different than last year’s, played just after a huge crash in March 2020. This time, I think people will be excited about their coins. And there ain’t no cat fight like a crypto cat fight when supporters (or shills) get together to back their favorite coin!

Big changes in this week’s bracket watch. You’ll notice the banner at the top has changed colors. That is because there are two, yes TWO new 1 seeds as long-time incumbents (and much-derided) 1 seeds XRP and Tether tumbled down to a 2 seed. Let’s get into it.

In the Bitcoin bracket, things look interesting. I see the top seed blowing past the first two rounds and then facing a TOUGH Sweet 16 matchup against privacy coin and crypto darling Monero. Last year, XMR blew out the OG in the Final Four round.

Could the same thing happen again? Difficult to say. There’s a lot of new people in the crypto sphere this year, who might not be familiar with the coin. Heck, Monero might not even make it past surging Binance USD or defi Aave.

In the bottom of that bracket, I could see Litecoin falling to surging Uniswap, which might climb even higher before the Ultimate Crypto Tournament begins in March.

Below them, in the Polkadot bracket, we first have to welcome the new 1 seed, which last year wasn’t even in the tournament! Talk about a mighty rise. Even in the first round though, they would face a tough challenge in ICON, who made it to the Sweet 16 last year as a 12 seed, taking out Ethereum Classic in the dreaded 5/12 matchup and Kyber Network before succumbing to Ethereum.

After that, Polkadot would face a tough test in either Neo or Maker, both of which are surging and would make a classic 8/9 matchup. I could see that one going either way. That’s why I love the tournament! I’m so excited!

I could see 12 seed Decred knocking off Cosmos, though they went to the Sweet 16 last year, knocking off two bitcoin forks: Gold and Cash before falling to Binance Coin.

Man, this bracket would be loaded. Look at who else is in there. USD Coin against yearn.finance. That one could go either way. Bitcoin SV would be a 6 seed against Ravencoin who has rocketed into this mock bracket after being completely absent the first two weeks. Chainlink (last year reached the Elite 8) is always tough, as is Tezos (Final Four last year).

Last year, Cardano fell in a tough 4/5 matchup to USD Coin, but I suspect they’ll be a tougher out this year.

Ok, let’s move to the right side of the bracket, starting with Ethereum. It’s funny how the brackets shake out. I see an EASY walk to the Final Four. I don’t see ANY challengers from the other high seeds of: XRP, Stellar, and Wrapped Bitcoin. Maybe, Stellar could put up a fight, but I don’t see it having the firepower to stay with the top seed.

Boom, down to our final bracket. Binance Coin, somewhat like Gonzaga, would have its first 1 seed after hanging around over the years and slowly grinding its way to the top. I see it making quick work of Dash and THORChain in the first two rounds, and then facing a tough challenge in Dogecoin in the Sweet 16. The meme coin could be a sleeper Final Four candidate. Last year, in the second round it was neck and neck with Bitcoin in the second half, before BTC pulled away.

On the bottom side of the bracket, there aren’t too many strong challengers. I could see Vechain knocking off Tether (has that audit happened yet lol?) in the second round and then giving Bitcoin Cash a run for its money. Whichever coin made it to the Elite Eight, I don’t see it moving past surging Binance Coin.