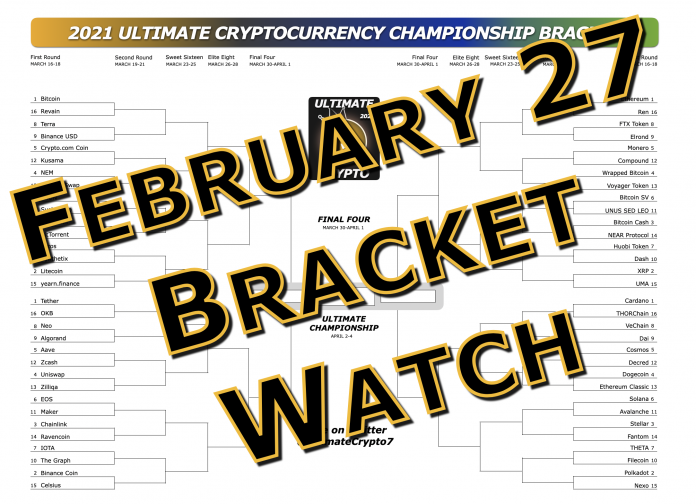 Cutthroat competition in the crypto sphere. Bring your A game or get left behind.

There was a huge shakeup in the mock bracket (the real one drops on March 14, Selection Sunday).

Previous 1 seeds such as Binance Coin and Polkadot tumbled back down to 2 seeds and a NEW 1 seed Cardano took one of their places. Oft-maligned Tether grabbed the final 1 spot.

In the Bitcoin bracket, there isn’t much stopping the granddaddy of them all until an Elite 8 matchup against Litecoin or possibly Tezos, if the 7 seed can pull the upset in the second round.

Otherwise, there are a collection of other weak top seeds such as USD Coin, NEM, Crypto.com Coin, and TRON.

Lower seeds SushiSwap and PancakeSwap might be able to spring the upset in this case and Litecoin might have trouble in the first round against dangerous yearn.finance.

In the bottom of that bracket, I could see Litecoin falling to surging Uniswap, which might climb even higher before the Ultimate Crypto Tournament begins in March.

Across the bracket, Ethereum retains its preeminent position. Five seed Monero would be a tough matchup in the Sweet 16, as it would likely move past Compound (though not necessarily) and weak 4 seed Wrapped Bitcoin.

The bottom of the bracket could have a juicy 2nd round matchup between the two forks Bitcoin SV and Bitcoin Cash. Let them duke it out in the only forum that matters, the Ultimate Crypto Tournament!

The winner of that would likely face Dash as a cinderella (though quite experienced) 10 seed in the Sweet 16.

Below them, in the Cardano bracket, we welcome the new surging potential 1 seed. It would face a challenge from 8 seed VeChain, always a tough out, and which made it to the Sweet 16 last year before being bounced by runner-up Monero.

Below them, in the Cardano bracket, we welcome a new potential 1 seed. It would face a challenge from 8 seed VeChain, always a tough out, and which made it to the Sweet 16 last year before being bounced by runner-up Monero.

Below them, the deck is stacked with 4 coins that could all challenge the top seed in the Sweet 16: Cosmos, Decred, Dogecoin, or Ethereum Classic. I could see all of those coins getting hot and stringing together a couple of victories, though my money would be on Dogecoin.

Below them, Polkadot would likely challenge the winner of the top half in the Elite 8. That bracket would really be wide open for the taking. I don’t see a clear favorite.

Finally, the final 1 seed goes back to nobody’s favorite Tether. If history is any guide, the winner of the Neo/Algorand matchup would make it past the top seed and into the Sweet 16.

The pod below that is also loaded with dangerous coins: Aave, Zcash, Uniswap, and Zilliqa.

Below them, I could see a likely 2/3 matchup between Chainlink and Binance Coin. That would be a great matchup. With cryptocurrency generating so much publicity this year, the later round matchups are going to be great. Both of these coins have been getting a lot of love, and many more people are familiar with a broader array of coins.