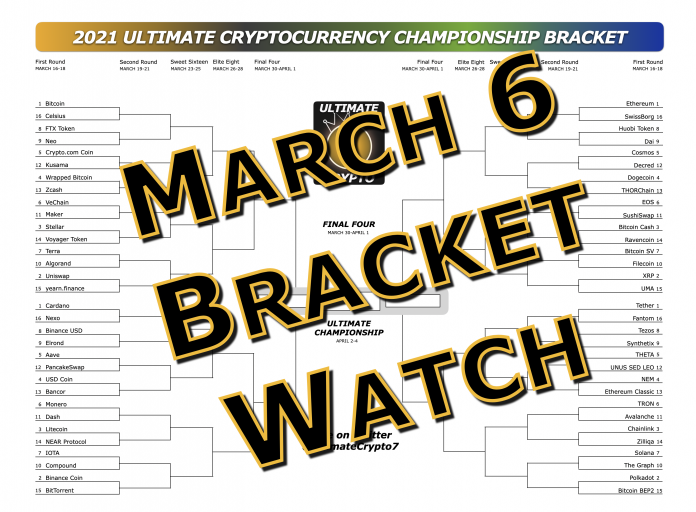 The final mock bracket is here, with the real deal delivered on Selection Sunday, March 14.

Some big changes occurred during this week. Some coins gained entry to the coveted field of 64, while others saw their fortunes reverse as they tumbled to the nether abyss.

The Bitcoin bracket once again looks to be an easy walk for the OG. A potential Sweet 16 matchup between Bitcoin and Wrapped Bitcoin would be entertaining, although 13 seed Zcash might make short work of the ERC 20 token in the first roung. A 1 vs. 13 matchup would be fun to watch as well.

In the bottom half of the bracket, a lot of evenly matched coins. The 6 vs. 11 matchup between VeChain and Maker would be a good one, as well as a second round matchup against Stellar. Tough draw for the 3 seed in this mock bracket.

Below them, I’d pick Algorand for a slight upset and even could see the 15 seed yearn.finance giving some trouble to surging Uniswap. Time will tell.

Below them, Cardano jumps back into a 1 seed position with fellow upstart Binance Coin in the 2 seed position there. Wouldn’t that be an interesting matchup in Elite 8?

What a bracket this is. Cardano has a tougher than most first round matchup against 16 seed Nexo. Below them, Elrond waits, a dangerous 9 seed.

After that, the road doesn’t get any easier. A battle of the DeFis between 5 seed Aave and 12 seed PancakeSwap (that 5/12 matchup is always dangerous for the high seed).

And below them is always strong USD Coin, which must first get past Bancor, the first time it has been included in this mock bracket, rocketing up the rankings over the last week for its first inclusion in the mock bracket.

In the bottom half of the bracket, BNB would need to make it past Monero, which would need to first make it out unscathed in its own first round matchup against 11 seed Dash. Not the tallest of orders, but Dash is no pushover. Last year it was this close to pulling its own upset of 3 seed Binance Coin.

Below them, Litecoin awaits, ready to challenge the winner of that game.

Binance Coin might have to break a sweat against either IOTA or Compound, both coming into the tournament red hot.

This mock bracket is stacked! Cardano, Elrond, Aave, Monero, Dash, Litecoin, IOTA, Compound, and Binance Coin round out this tough bracket. We’ll see what the real one looks like next week.

On the right side of the bracket, Ethereum, amidst controversy and high gas fees retains its perch as the 1 seed. It might face a stiff test from 9 seed Dai, but looks to have an easy road into the Sweet 16.

Here the road gets more interesting. Three of the coins in this pod are no easy out. Again the 5 vs. 12 matchup between Cosmos and Decred is up in the air. Below them, tournament darling Dogecoin would love nothing more than to get a shot at the 1 seed in the Sweet 16.

In this mock bracket, I could see every high seed in the bottom portion being ousted in the first round. 11 seed SushiSwap is a tough first round matchup for fading EOS. Bitcoin Cash could have its hands full against fan-favorite Ravencoin.

Below them, Bitcoin SV has fallen all the way to a 7 seed and could face a tough test against lurking Filecoin. Finally, XRP was blown out in the first round as a 1 seed against THETA and the same thing may happen were they to face tough UMA.

If all those upsets were to happen, it would be anyone’s guess as to who would emerge to challenge the likely winner of Ethereum and Dogecoin.

Finally, the final 1 seed goes back to nobody’s favorite Tether. If the not-so-popular stablecoin can make it out of the first round, it likely would be shot down by the winner of Tezos and Synthetix. I give the nod to the 8 seed here.

In the bottom portion, Chainlink and Polkadot meeting in the Sweet 16 seems the most likely outcome, with the winner of that game having the edge to the Final Four.